THATCamp Pittsburgh 2018 met this past weekend and was a great success. Thanks to our organizing team (Jessica Benner, Susan Grunewald, Jessica Otis, Abigail Owen, and Emma Slayton) as well as our awesome sponsors (dSHARP, CMU’s Department of History, the Frank-Ratchye STUDIO for Creative Inquiry, and the DHRX). 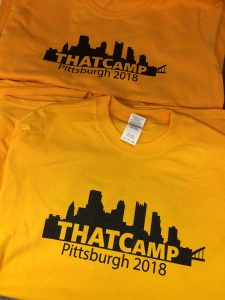 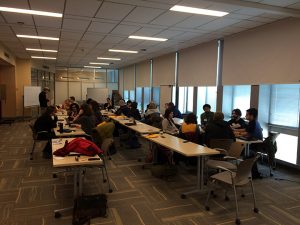 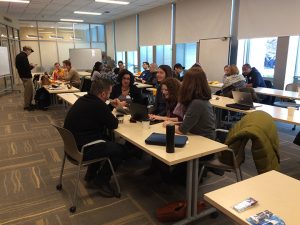 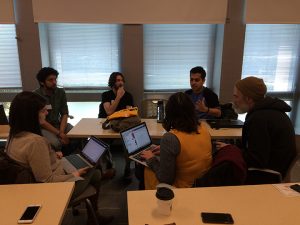 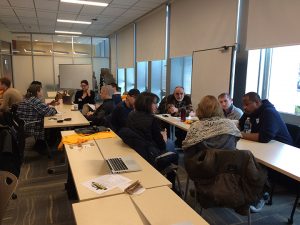 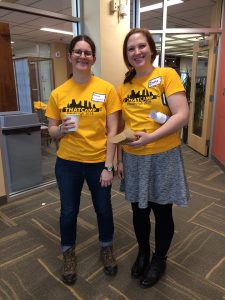 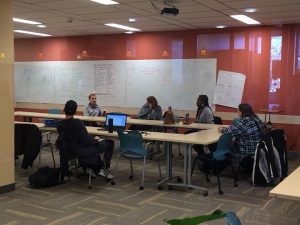 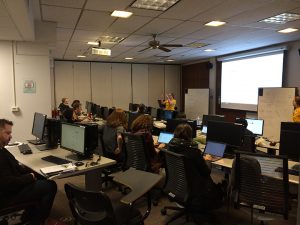 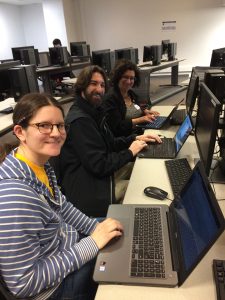 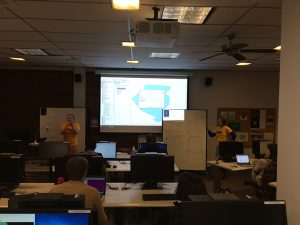 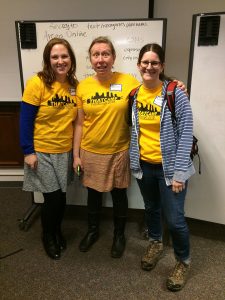 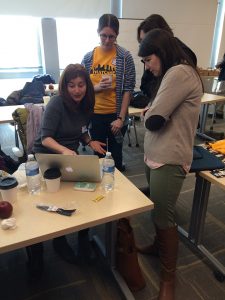 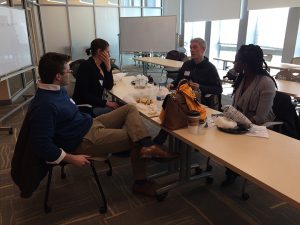 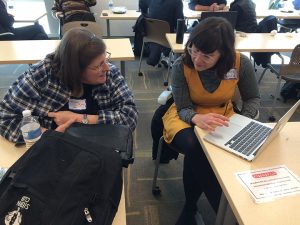 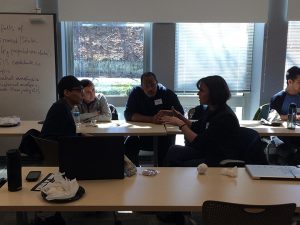 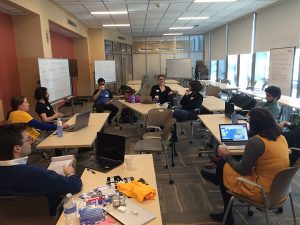 Shannon Mattern will be giving a talk on Thursday, February 1st at 4-5:30pm at CMU’s Sorrel Library Den (Wean Hall, 4th floor).
Ether/Ore: An Atlas of Urban Media
Studded with sensors, optimized by algorithms, interfaced via dashboards and apps, cities are imagined as computers writ large, planned “from the Internet up.” Yet this new age of sentient urbanism — in which place-based intelligence is reduced to “smartness” — has a long and deep lineage. This talk, drawing on my new book, Code and Clay, Data and Dirt: 5000 Years of Urban Media, will take us on a world tour of cities that embody various materialities of intelligence: both code and clay, data and dirt, ether and ore.
She will also be giving a workshop, in Pitt’s Digital Scholarship Services on Friday February 2nd at 10am.
Willful Transgressions: Transdisciplinary Teaching
In this workshop, we’ll look at the various motivations and ambitions behind campaigns for transdisciplinarity — and we’ll explore the opportunities and challenges of transforming trans- or post-disciplinary aspirations into program building, curricular design, and pedagogical practice.

On Wednesday October 25, the DH reading group will be meeting from 5-6:30pm at Hemingway’s Cafe to read work by Ursula Lutzky and Heather Froehlich (with a probable appearance by Heather Froelich depending on traffic).

Our selections this month:

CMU’s new dSHARP center is kicking off an annual speaker series. We’ll be bringing in scholars for talks and/or workshops on a variety of digital research and publishing subjects which will hopefully be of interest to the greater Pittsburgh DH community.

Our first visiting speaker is Heather Froehlich of Penn State, whose visit is co-sponsored by the English Department’s Digital Media Lab at the University of Pittsburgh and the DHRX. She will be giving a talk on Thursday Oct. 26 and a workshop on Corpus Linguistics with AntConc on Friday October 27th.

THURSDAY, OCTOBER 26
4:30-6:00pm • 202 Frick Fine Arts
University of Pittsburgh
In the early modern period, women were passed from father to husband, and in particular were insulted and debased by accusations of ‘whore’ (i.e. not chaste and not silent) when they acted out against an established social order of male empowerment. Kay Stanton, in her chapter in a Feminist Companion to Shakespeare (2010), lists and describes all the ways the word ‘whore’ is used to demean women in
Shakespeare’s plays. In this talk, I will use the Historical Thesaurus of the Oxford English Dictionary (http://oed.com/thesaurus) to present a larger list of terms synonymous with ‘whore’ in use during Shakespeare’s life. With a larger lexicon for feminine lack of purity, it is possible to show a better picture of how whorishness and feminine dishonour is constructed in Shakespeare’s plays.

FRIDAY, OCTOBER 27
10am-12pm • CFA 317
Carnegie Mellon University
Corpus Linguistics with AntConc
Corpus analysis is a form of text analysis which allows you to make comparisons between textual objects at a large scale (so-called ‘distant reading’). This hands-on workshop explores the basic principles of quantitative text analysis using a graphical user interface. We will discuss how to use computers to identify patterns in language by covering a few basic principles of corpus methods, including keywordin-context analysis, very basic statistics, and how computers can be used to generate more nuanced questions for a given dataset.

As is common for visiting scholars, we will be hosting a small dinner for her on Thursday night. We will also be hosting a “kaffeeklatsch” (a small group hanging out over coffee/tea) either Thursday morning or Thursday early afternoon depending on when people are available. We very much want to have a good mix of CMU and Pitt folks at each of these, ideally with both people who are already actively involved in our DH community as well as “DH-curious” folks who’d like to learn more about what we do.

Who: anyone interested in reading analytical articles encompassing the digital humanities, including but not limited to digital history
What: read some stuff of interest to the group members, get together over food or drinks and discuss the readings
When: September 27th, 5pm-6:30pm and repeated on the last Wednesday of every month, August-May (no meeting in June or July)
Where: If you know of a quieter place with food/drink in the Oakland area where we can meet, please let me know and I’ll check it out!  In the meantime, we’ll stick to Hemingway’s Cafe (3911 Forbes Ave).
Our readings this month will be from the Viral Texts project:
Hope everyone had a productive and/or relaxing summer!  To celebrate our return to campus, dSHARP would like to invite Pittsburgh digital humanists to a social gathering at CMU’s Hunt Library Studio B on Tuesday September 12th, 4:30-6pm.  Light refreshments will be served.
Meet like-minded researchers, catch up with what’s going on in our city, and welcome any new members to our PGH|DH community.  All faculty, staff, and 21+ students interested in DH are welcome to attend, so please feel free to forward this invitation to other members of your departments (especially new faculty and graduate students) who are not on the CMU or Pitt listservs.

Who: anyone interested in reading analytical articles encompassing the digital humanities, including but not limited to digital history

What: read some stuff of interest to the group members, get together over food or drinks and discuss the readings

When: Tuesday, August 29th*** (one time change only), 5pm-6:30pm and repeated on the last Wednesday of every month, August-May (no meeting in June, July, or December)

Our readings this month will be:

Who: anyone interested in reading analytical articles encompassing the digital humanities, including but not limited to digital history

What: read some stuff of interest to the group members, get together over food or drinks and discuss the readings

When: May 31th, 5pm-6:30pm and repeated on the last Wednesday of every month, August-May (no meeting in June or July)

Where: We are still questing for the perfect meeting location. Since most of the students are gone, however, let’s go again to Hemingway’s Cafe (3911 Forbes Ave).

Our readings this month will be:

Because a lot of people will be leaving town already, please RSVP to me (jotis *at* andrew.cmu.edu) if you intend to come, so that I know we have a quorum.

Join our team! The Alliance of Digital Humanities Organizations (ADHO) seeks applicants for its 2017-18 Communications Fellowship.

Working on a small team, two fellows will write news releases, blog posts, and announcements about ADHO, its constituent organizations, and the broader digital humanities community; monitor and update ADHO’s social media presence; maintain its website; help to develop and implement ADHO’s outreach strategy; and perform other communications-related responsibilities. The fellows should anticipate spending approximately 3-4 hours per week on the position. The fellowship comes with a small annual stipend of 600 Euros. It is well suited for graduate students, young scholars, and academic professionals who wish to develop deeper knowledge of digital humanities and its global communities, contribute to an important digital humanities professional organization, and gain professional experience in social media and communications.

Desired skills and qualifications include:

To apply, submit a CV or résumé, a brief writing sample, three letters of reference, and a cover letter describing your interest in and qualifications for the position to Hannah Jacobs, chair of ADHO’s communications committee: communications@digitalhumanities.org. The application deadline is May 31, 2017. Two positions will be available. The fellowships will extend from July 1, 2017 to June 30, 2018.